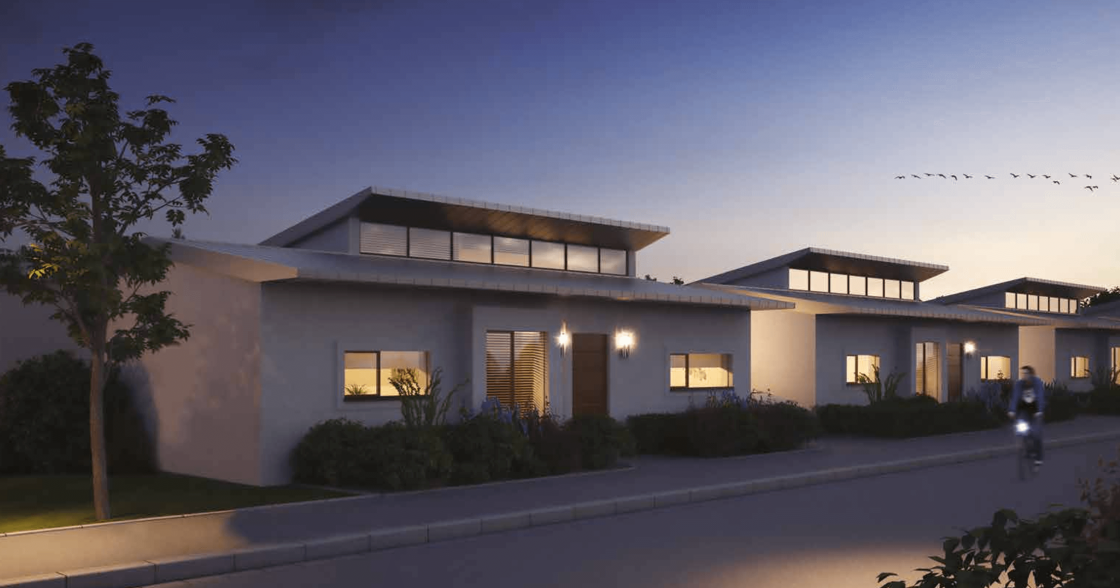 This latest acquisition is testament to how the housebuilder is accelerating its five-year growth plan. The announcement comes just three weeks after Devonshire Homes revealed it had exchanged conditional contracts on 36 acres of land in Penzance. The West Yelland site strengthens the award-winning housebuilder’s presence in North Devon, where construction has recently started on its East-the-Water site, The Grange.

This development, known as the ‘Sun Houses’, is located in the desirable village of Yelland which is between the coastal village of Instow and Fremington, off Yelland Road. Within a short distance the popular beaches of Westward Ho! and Saunton Sands can be found and Yelland has easy access to the A39 and A361.

This architecturally exciting scheme designed by Guy Greenfield Architects will complete the development and deliver 27 open market and 22 affordable homes in North Devon.

The three, five and six bedroom detached homes are in an elevated position and make the most of their southerly aspect with estuary views and are surrounded by green, wooded hillside.

Designed to maximise the use of natural light with large expanses of glazing, the open plan living makes the most of the desirable outlook benefiting from living areas and at least one bedroom South facing into a walled garden. The stylish contemporary homes take on a modern interpretation of the traditional bungalow.

Devonshire Homes will invest more than £430,000 in the local community under the S106 contributions, including: £294,225 towards education, £127,291 towards recreation and £10,000 towards play equipment. Benefitting the existing occupied homes on the centre of the site, Devonshire Homes will also resurface the neighbouring roads which adjoin the site.

“We’re delighted to announce that we have exchanged contracts on land in West Yelland just three weeks after securing land in Cornwall. We are focused on securing excellent development sites and I am pleased we've been able to do exactly that here. As an independent and West Country housebuilder, we are able to react rapidly and progress quickly when this type of land opportunity arises, and we look forward to bringing more of our high-quality, new build homes to North Devon house hunters who need them.

“These new homes will be truly spectacular. Each property has been carefully designed to make the most of their elevated position on the North Devon coastline so that homeowners can truly embrace the beautiful views.

“Construction will start later this year and we will ensure to communicate with the existing homeowners already on site throughout the project.

“If you are landowner or agent looking for a developer capable of delivering on their promises, Devonshire Homes should be your first call. This deal has set a new record for the business, going from nothing to an unconditional exchange in 4 days!”

The acquisition of land in West Yelland is another important strategic milestone for Southwest based Devonshire Homes. The 30-year-old residential home developer is aiming to double turnover and build 400 homes per annum by 2026.