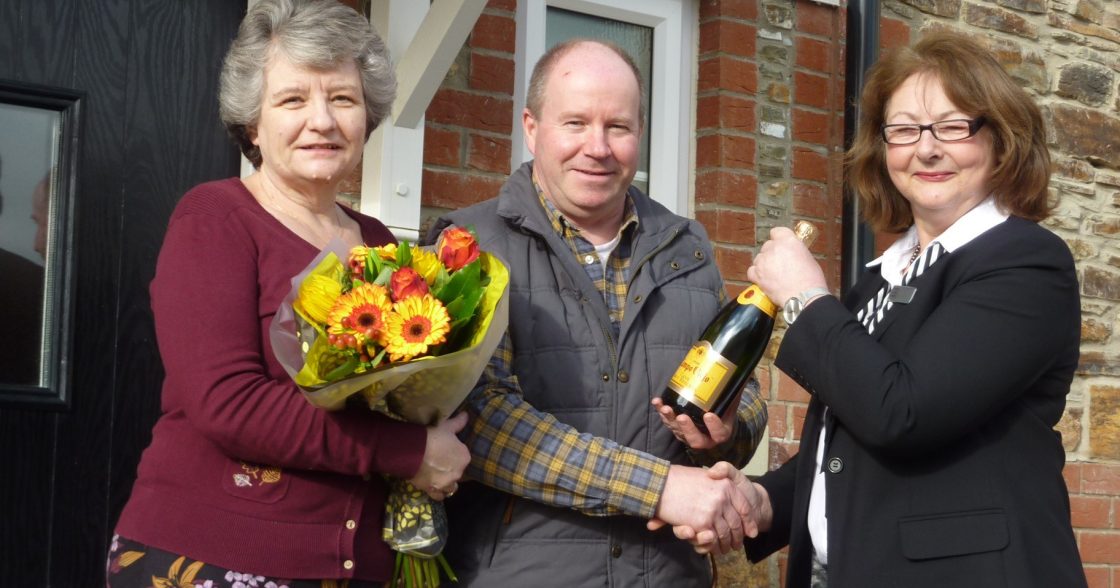 Grandparents find their unique "modern cottage" at The Tors

Susan and Simon Wilkes started to search for a new home in Devon in a bid to move closer to their family. The couple, who previously lived in Wolverhampton, visited Devonshire Homes’ Bovey Tracey site, The Tors, after being made aware of the development by their son-in-law.

“We’d been thinking about moving to Devon for a while as one of our daughters had recently moved to Bovey Tracey and our other daughter lives in Ashburton” said Susan. “We visited my daughter when she gave birth to our grandson and my son-in-law told us that Devonshire Homes were building a site up the road.”

After struggling to find a second-hand property that met their needs, Susan, 57, and Simon, 55, visited The Tors and were impressed with the three bedroom, semi-detached Bovey house type. Deciding to make the move, they downsized to their new home in Bovey Tracey in June 2017.

“Our new home meets all of our needs” said Susan. “We were keen to downsize as our children are all grown up now, so we didn’t need as much space. We’ve already lived in a traditional semi and a detached house, so we were looking for something a little different. The Bovey has a quirky layout and style compared to other homes and the Devonshire stone used on the outside makes the house look like it has a bit of character. It’s like a modern cottage! It’s evident that the layout has been carefully designed, we don’t hear our next-door neighbours and it almost feels like we still live in a detached home.”

The Bovey house type features three bedrooms with the master bedroom boasting a luxury en-suite and fitted wardrobes. Susan and Simon admired the layout of the house, particularly its unusual shape.

“The second bedroom is one of my favourite rooms in the house as it’s just such a pleasant surprise” said Susan. “It’s an interesting shape and we’ve placed some nice furniture in there to make the most of it. We also like the hallway as it’s quite spacious. With a lot of new builds, you often feel that storage space has been compromised, but not here, even our hallway has two useful cupboards so we have lots of storage space.”

Having previously lived in Wolverhampton, the couple didn’t know much about the area before they moved but have quickly come to admire the charming town of Bovey Tracey.

“We didn’t really know anything about Bovey Tracey” said Susan. “We’d visited a couple of times to meet up with our daughter but didn’t know much about the area. Now that we live here, we’ve grown quite fond of it. The town is big enough, not too remote and feels quite spacious with nice countryside surrounding it.”

The Devonshire Homes team made a positive difference to the moving process for the couple by being both helpful and professional.

“The Devonshire Homes team were really helpful throughout our move” said Susan. “We used the Complete Move scheme where Devonshire Homes pay your estate agent fees for you. As we had a house to sell and we hadn’t even put it on the market when we looked around The Tors, we were a little worried that it wasn’t going to sell in time. However, Devonshire Homes didn’t put any pressure on us. My estate agent also said that he was very impressed with how prompt the payment was from Devonshire Homes as well.”

“We’d recommend Devonshire Homes to anyone looking to buy a new home in Devon” finished Susan. “We’ve already had great feedback from our friends who have come to visit us. They’ve said that our home looks like a solid new build with a quality finish.”