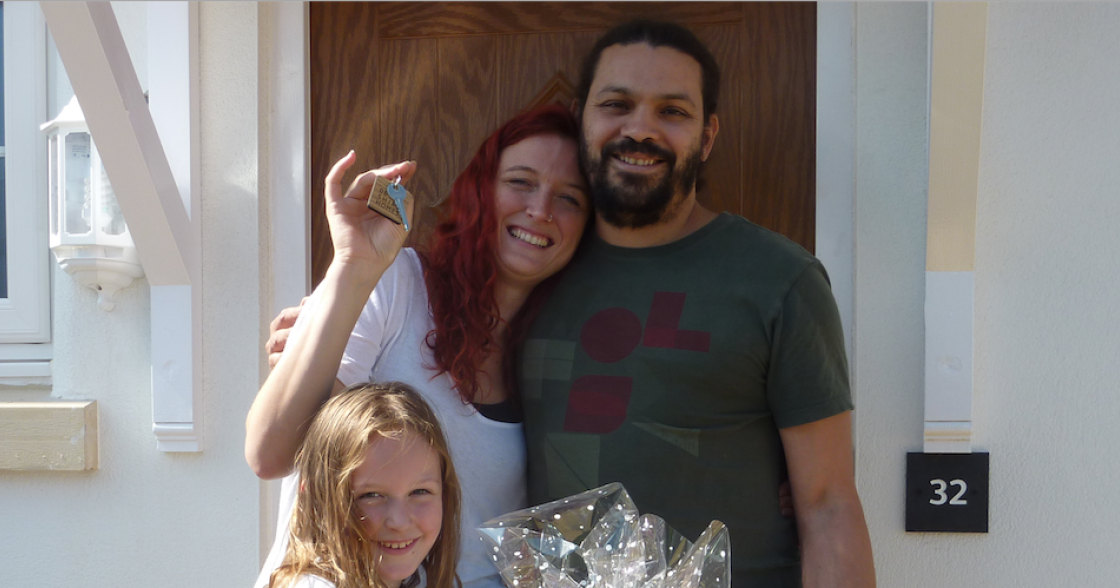 Some could say it was fate that brought Denis and Ellie to Devonshire Homes’ Ladywell Meadows in Chulmleigh. Having lived in the Saxon hilltop market town for six years, Denis works as an electrician and part-time chef in the local pub and appeared in the promo video for the new homes development – years before the family even considered moving house.

“About four or five years ago, I was working in the pub and a couple of people from Devonshire Homes came in and told us all about the video they were making about the local area. They asked if they could film me making pizza” said Denis. “I only saw that video recently and thought how strange, now I’ve bought a Devonshire Homes property!”

With Ellie’s two daughters, Izzie and Hollie, the couple were looking for a home that offered more space and was well equipped for family life.

“We were originally looking at an older property and didn’t even consider a new build home” said Denis. “I’m an electrician and I’d been called out to Ladywell Meadows to do some work on the homes in phase 1. I just did some small jobs such as moving lights around. Working within the homes, I could see the high-quality build for myself. Being an electrician, I do go inside a lot of new build homes and I really rate the quality of Devonshire Homes’ properties so I decided to make an enquiry.”

After falling in love with a three bedroom Webb house type, the family decided to take the plunge and moved into their new home in August 2018.

“We chose our particular Webb because it was detached and that was the deciding factor for us” continued Denis. “One of my favourite rooms in our new home is the lounge. It’s the biggest room in the house with its open-plan layout and with two kids running around, it really does meet our needs. The garden is also excellent. Being detached and on a corner plot, the garden offers plenty of space. We’ve got a really long drive for two cars and a garden at the front so overall we are really happy with the property.”

The couple were keen to live in Chulmleigh with Denis working in the town and Ellie having lived in the local area since she was eleven years old.

“We have a really nice community within Ladywell Meadows” said Denis. “Three houses next to us have all been bought by the younger generation of the people who have lived in Chulmleigh for years. There are still some new people moving to the area but a lot of the homes have been bought by the next generation of Chulmleigh residents so it’s really nice that the community is still quite local.”

Located midway between the beautiful national parks of Dartmoor and Exmoor, Chulmleigh has a lot to offer including good schools, a library, sports centre and a range of shops.

“The location of Ladywell Meadows is really convenient” continued Denis. “It’s just a five minute walk from the town and all the local amenities are right on your doorstep.”

The Devonshire Homes team made a positive difference to the moving process for the family by being both helpful and professional.

“Our Sales Executive, Margaret, was great throughout the whole process” said Denis. “She was really helpful when it came to suggesting which financial advisor to use. They both worked together to make sure all the paperwork was going through smoothly and that it was all on time and to schedule. Whenever we had any questions, they were there with the answers so they helped a lot in terms of getting the mortgage sorted. When it came to moving in, Diana the Sales Manager was excellent. She took us around our home and showed us how everything worked. As with most new builds, we had some snags but as soon as these issues were reported, someone was in touch straight away to sort it out.”

“We’d definitely recommend Devonshire Homes” finished Denis. “Being in the trade and seeing the high-quality build of the homes with my own eyes is what persuaded me to go and have a look at the properties in the first place. I would encourage others to have a look around the show home and to see the quality for themselves.”